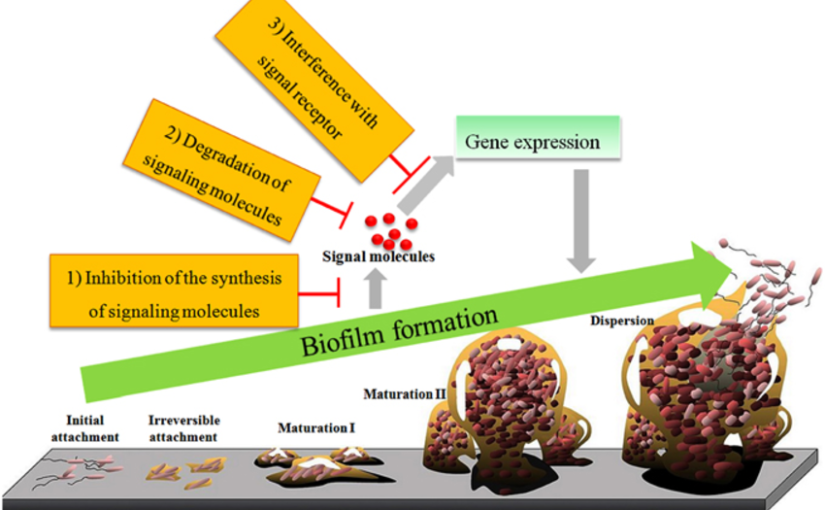 Biofilms are the surface adhered aggregates of microorganisms embedded within a thick layer of exopolysaccharide (EPS) matrix. Bacteria in this polysaccharide matrix are well-organized structures that enable transport of nutrient and waste in-and-out of the biofilm. Most of the time biofilms are comprised of several bacterial species. Due to protective shielding by the polysaccharide matrix, biofilm bacteria exhibit higher resistance to antimicrobials and host immune responses, creating a major clinical problem (Flemming, Wingender et al. 2016; Hall and Mah 2017). Biofilms are formed in a stepwise manner (i) Free cells get attached to a surface, (ii) Cells secrete EPS and this attachment becomes irreversible, (iii) Formation of microcolonies and beginning of biofilm maturation. (iv) Formation of mature biofilm where cells are packed in clusters having channels in-between to transport food and waste in and out of the biofilm, and (v) Detachment and dispersal of cells from biofilm.

In modern clinical microbiology, the formation of bacterial biofilms is considered a pathogenicity trait during chronic infections. Quorum Sensing (QS), cell-to-cell chemical communication, plays a major role in the formation of biofilms (Ng and Bassler 2009). The observation that QS is linked to virulence factor production and biofilm formation suggests that many virulent Gram-negative organisms could potentially be made nonpathogenic by inhibition of their quorum-sensing systems (Yarwood, Bartels et al. 2004). Discovery of human immune system compatible QS inhibitors (QSIs) can be an alternate means to cure many common and damaging chronic infections without the use of growth-inhibitory agents, such as antibiotics, preservatives, and disinfectants that inevitably lead to the selection of resistant organisms.

Several studies in which bacterial QS regulator(s) have been knocked down, demonstrated that these bacteria form thinner layers of biofilm and are more susceptible to antimicrobials (Rasamiravaka, Labtani et al. 2015; Tseng, Majerczyk et al. 2016; Kalaiarasan, Thirumalaswamy et al. 2017). A study by Hentzer et al, 2004, using a synthetic halogenated furanone compound, a potential QSI, demonstrated that this compound affects the architecture of the Pseudomonas aeruginosa biofilm and enhances the process of bacterial detachment, leading to a loss of bacterial biomass from the substratum (Hentzer, Riedel et al. 2002). Complementary to this study, Rajkumari et al, 2018, reported that compounds pentacyclic triterpenes and betulinic acid could be used to attenuate the production of QS-regulated virulence factors and biofilm formation in P. aeruginosa. These compounds significantly interfered the initial stages of biofilm development by decreasing the exopolysaccharide production and cell surface hydrophobicity. In-vivo studies established that the administration of these compounds resulted in enhanced survival of Caenorhabditis elegans infected with P. aeruginosa (Rajkumari, Borkotoky et al. 2018).

Although much remains to be learned about the involvement of QS in biofilm formation, maintenance, and dispersal, QSIs have been proposed as promising antibiofilm agents, and ongoing developments could translate QSIs as future antimicrobials (Anand, Rai et al. 2013).